There are two big enemies of mobile communication. Weak signal and battery drain. With the LTE technology in place we need to deal with the situation when our signal gets too weak. The higher frequencies have a problem to penetrate walls, currently the radio network is not covering whole country yet, etc..  these problems seems to be only temporary (as the LTE is moving forward) but at this point of time we can’t rely on the LTE network only. When we are out of 4G coverage while we are not calling we’ll simply fallback to CS network and VoLTE supports CS breakout or CS retry so our voice service is still working.

But what if it happens during an ongoing call? Can we handover and still maintain the session? It is possible but not easy as because of the battery drain we can access only one radio network at the time. What we are looking for is called enhanced Single Radio Voice Call Continuity (eSRVCC) and it is described in the GSMA IR.64 and ETSI TS 124 237. (SRVCC is applied during PS to CS access transfer in a single radio system from LTE to 3G/2G. For devices that support active WiFi, and 3G/2G and LTE dual radio, the enhanced Dual Radio Voice Call Continuity (eDRVCC) is applied.)

eSRVCC call flow is probably one of the most complex flows you can encounter in VoLTE. Read firstly about the basic flows VoLTE in IMS. In case of doubts or when more scenarios/details needed please refer to the spec.

To allow this functionality we need to add some more IMS elements in the network:

ATCF acts as SIP signalling anchor and is located in the SIP signalling path between P-SCSF and S-CSCF. Very often it is part of the SBC. ATCF controls the ATGW, where the media plane is anchored. During the session transfer, the ATCF establishes a new session with the SCC AS. This new session substitutes the old session between the ATCF and the SCC AS.

The ATGW anchors the media session.

The SCC AS anchors originated and terminated sessions when using the PS or CS access. It is also responsible for the Terminating Access Domain Selection (T-ADS). 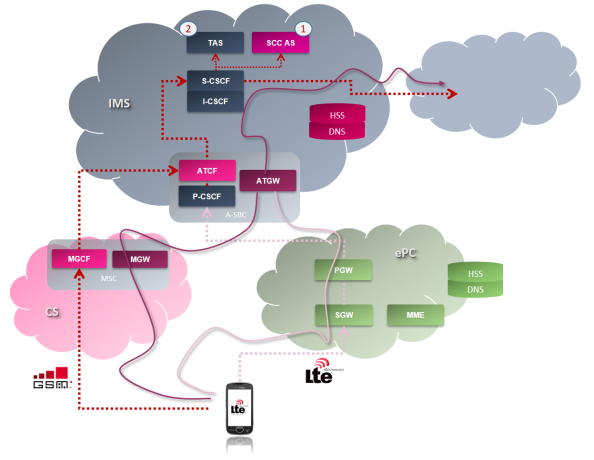 As the new elements ATCF and SCC are anchoring the session we have also to modify the basic VoLTE flows.

Firstly we need to modify the registration. We have to send the information about what ATCF is responsible for the user to enhanced MSC/MGCF. This information is called Session Transfer Number for SRVCC (STN-SR) and it is a TEL URI of ATCF. Another important information which we need to exchange is the MSISDN which is being used by the user in the CS network. We call it Correlation MSISDN (C-MSISDN). And last but not least ATCF has to be able to address the SCC AS. The address is referenced as Transfer Update – Session Transfer Identifier (ATU-STI) and it is a SIP URI of SCC AS.

According the ETSI TS 124 237  the UE doesn’t need to advertise its capability to do the eSRVCC (PS-CS).

Then the ATCF forwards the SIP REGISTER request to the I-CSCF.

SCC AS will receive the STN-SR (the TPR contains the original SIP REGISTER in the body) and will update the ePC HSS. Then it’ll send its own uri – ATU-STI along with the C-MSISDN to ATCF as an xml payload of a SIP MESSAGE: 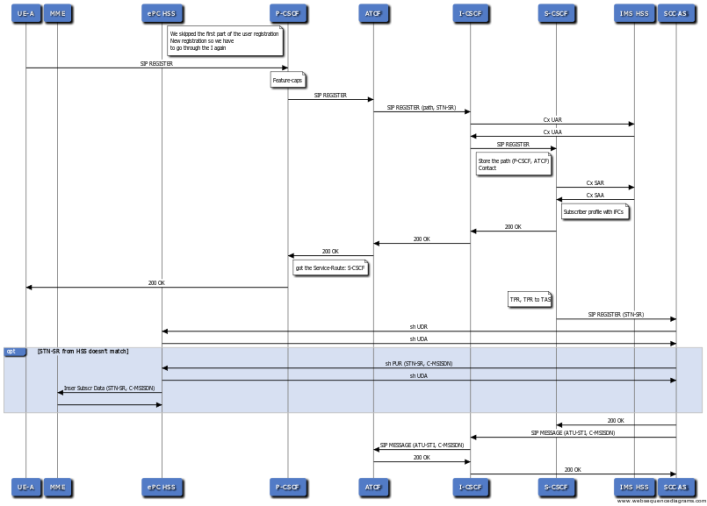 When a weak signal is detected the MME sends a handover request to CS network. Part of the request is the STN-SR and C-MSISDN. MSC/MGCF will create a new SIP INVITE and will send it to STN-SR e.g.

ATCF finds the existing dialog for C-MSISDN (P-Asserted-Identity) and decides whether to anchor the media in the ATGW. Then sends a new SIP INVITE to SCC AS with the Target-Dialog which is to be transferred:

If the call is anchored in the SBC (ATGW) then we don’t need to renegotiate the SDP again. The SBC will simply do the translation between the access leg (e.g. narrow band) and remote leg (e.g. wide band). In case that this is not possible the SCC AS will send SIP UPDATE with the new SDP. This is something we are trying to avoid as it noticeably increases the delay during the transfer.

Note that in the eSRVCC scenario an implicit deregistration from the IMS network is missing, instead we relay on T-ADS done by SCC AS.

Of course there is more then just eSRVCC.  3GPP in its releases gave us a nice set of various SRVCC scenarios.

… and maybe some more.

During the SRVCC we can then transfer not just an ongoing session, but also a session during its setup phase. 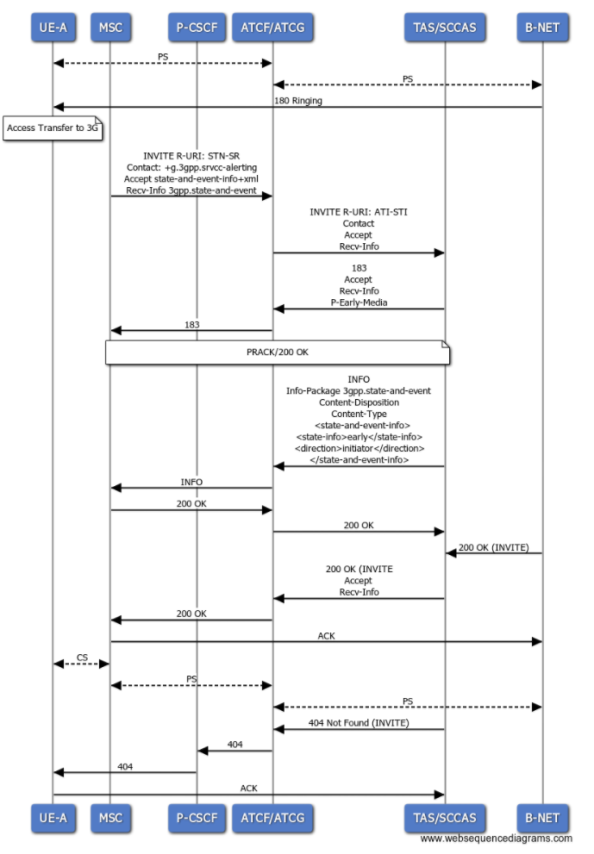 The basic idea is quite straightforward. We simply use the SIP INFO method to carry XML document, which updates the relevant network elements on the session setup progress.

What type of SRVCC is supported by MSC is indicated in the incoming (transfer) INVITE in the Contact header e.g.:

However there can be many things which can happen during a session set up including the early media. Or call forking. Or we can also transfer one session which is ongoing and another which is just incoming or which is currently on hold. Or even a conference call. Good luck with the troubleshooting 🙂

One thought on “eSRVCC – Mind the coverage hole!”

Say the truth, say it aloud and don’t collaborate with the lie.