Maybe you remember what I said about Group Messaging. That all the RCS deployments would be done faster without this feature. A similar thing we can say about VoLTE Conferencing. Ad-Hoc Multi Party Conference Call (CONF) is one of the basic requirements we have on VoLTE calling. Simply put each VoLTE network has to support conference calling. But to troubleshoot this great functionality can be a nightmare.

Ad-Hoc Multi Party Conference is one of the Supplementary Services supported by Telephony Application Server (TAS) (a dedicated Conference AS is an option too) and it is described in GSMA IR.92, which then refers to 3GPP TS 24.605 and 24.147. Today we’ll take a look at the conference call flow, along with the Mr’ interface between TAS and Media Resource Function (MRF).

Although we talk about conferencing, in fact it’s just a multi-party call. We don’t schedule any conference call for a given list of participants. We can only add additional numbers to an existing call. That’s why we describe the service as an ad-hoc conference. From the mobile operator point of view the conferencing service provides the means for a user to create, manage, terminate, join and leave conferences as well as the ability to update the involved parties. But most of the stuff is truly hidden to the end subscribers.

In general both voice and video conference can be supported, but only the support of audio media is required by VoLTE standard. The maximum number of participants differs network to network, usually it is between 6 and 10. Note, that the functionality is not limited to VoLTE users only, we can add to the call the CS users too.

The conference creation is quite complex and we refer to it as a Three Way Session creation. In a nutshell ad-hoc conference means to add a user to an existing call. The steps are

For simplicity we won’t talk about preconditions, early-media, SIP PRACK etc. Sure, you’ll find the related SIP messages in your pcap.

So let’s say that UE-1 and UE-2 are engaged in a call. At some point in time UE-1 decides to involve UE-3 into the communication and activate the 3PTY CONF service.

UE-1 puts UE-2 on hold, initiates a session towards UE-3 to get the user’s permission to start 3PTY call. 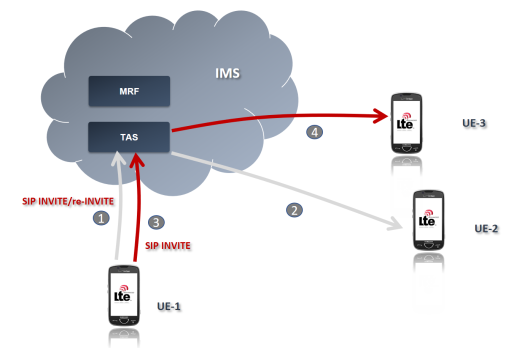 Then UE-1 creates the conference initiating a call to Conference Factory URI. Conference factory URI points to so-called focus – a central hub which handles all the conference signalling. In a standard deployment TAS equals focus.

MRF acts as a media mixer. It allocates the resources and provides its SDP. TAS then generates a conference specific identifier – conf-uri –  which we can found in the Contact header of 200 OK response along with the isfocus tag and SDP of MRF.

When the CONF service is invoked, conference resources are allocated to the served user UE-1. Once a conference is active, users can join and leave a conference, and remote users can be added to or removed from the conference.

To add the other two users into the conference the UE-1 moves the original communication with both UE-2 and UE-3 to the conference server (TAS). To do that UE-1 does use a SIP REFER method (SIP REFER is generally used for call transfer scenarios).

Technically there are two options how to use SIP REFER. Either it can be send to a particular user or to the focus. In case of VoLTE the standard allows only the SIP REFER sent to the focus (TAS).

Note that the Floor control for conferencing is only optional. Also Consent procedures for list server distribution  are not required.

3GPP TS 24.166 provides a standard mechanism for the UE how to discover the Conference Factory URI to be used for the CONF service using the Management Object. The Management Object Identifier is: urn:oma:mo:ext-3gpp-conf:1.0 and the parameter is defined as /<X>/Conf_Factory_URI.

If the UE has not been configured with Conf_Factory_URI parameter, then it constructs the “Default Conference Factory URI for MMTel” as a SIP URI with a host portion set to the home network domain name prefixed with “conf-factory.” The user portion should be set to “mmtel“. Examples:

When leaving a conference, the user generates a SIP BYE request on the dialog that was established when joining or creating the conference (dialog with focus).

In practice I’ve seen many different implementations of the conference service. These implementations were using different SIP headers, even strange tags as “is-focus”, they differed in the way they were handling conference event package, how they communicated with MRF (or even with a CS media server!) or in rules how to terminate conference (e.g. what happens if the initiator leaves the conference).  Last but not least, there can be some early media played, conference call can be also a subject to Access Transfer or we may need to think about online charging (what if the recipient is the charged party?). It’s a great thing we can do a conference call, but the price is sometimes high.